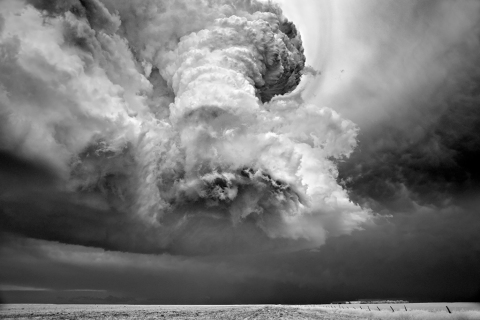 I would argue that Mitch Dobrowner is the greatest master landscape photography has yet known.  His art both subverts the previous masters and enlarges the potential for meaning within the landscape photograph.  With few exceptions the work of those earlier masters is characterized either by its beauty or a sense of spirituality.  But Mitch Dobrowner’s principal concern is not the capturing of those qualities but the capturing of a Vision, a unique vision no one before has seen.  In spite of the craft of his predecessors, none of them in their time could have made a Dobrowner photograph.

What we take away with us from looking at any artist’s work is his or her unique way of viewing the world.  That is what we care about, that is what we want from art—a new way of seeing—which also means a new way of thinking about a subject.

Dobrowner’s vision has a technological aspect to it, but his use of technology has less to do with cameras and photographic processing than it does with how he finds his subjects.  He goes into the explosive heart of storms with a technology that previously did not exist.  What he shows us other people may have seen before, but they could easily have died in the process.  Mitch takes those same risks, but with high tech tools.  He has interlocked his aesthetic vision and the explorer’s adventuresomeness with modern technology:  with earth-observing weather satellites, the meteorological forecasts of the National Weather Service, brave and willing pilots, small airplanes, automobiles, and fearless guides.  This combination of variables takes him to his subjects.  By going where few would venture, he has brought back for us unseen visions, visions that rise to the level of the prophetic, visions that allow us to see some of Nature’s previously hidden secrets.

You are currently reading Mitch Dobrowner by John Wood at 21st Editions.