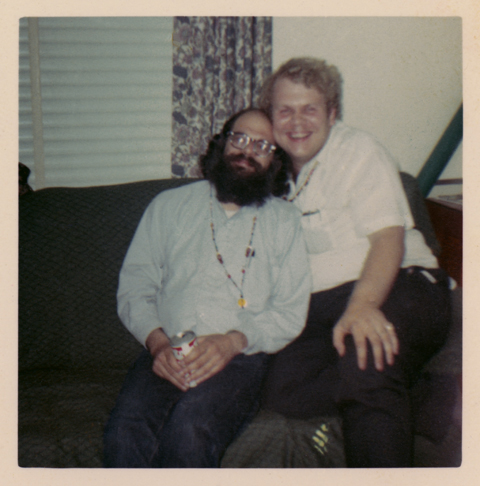 May  2011 :  I had not forgotten that these pages existed, but I’d not read them since I wrote them in 1969 recording a visit of Allen Ginsberg and Peter Orlovsky to Fayetteville, Arkansas, to give a poetry reading.  I had been in correspondence with Allen for a few years.  It started simply with a fan letter which he responded graciously to.  The accessibility of a famous poet and cultural figure to a kid trying to write poetry at Arkansas State College in Jonesboro, Arkansas, was exhilarating.  I had been reading him since I was in the tenth grade.  It was the early sixties, and I, too, wanted to Howl.  By the time I finally met Allen, I had discovered Wallace Stevens and Richard Wilbur and drifted from his influence.  And Allen obviously thought I had become overly ornate,   but he did kindly offer to write the introduction to a small limited edition of my poems called Orbs printed in 1968 by Harold Swayder, an artist who made woodcuts for each of the poems.  Swayder’s woodcuts and Allen’s kind introduction are the only good things about the book, which, thankfully, was in such a small edition few people have ever seen it.  In 1969 I entered the MFA Program in Creative Writing at the University of Arkansas, which at that time was one of only thirteen MFA programs in the country.  Because of my connection with Allen, the question arose of whether I might be able to get him to come for a reading.  The MFA Program’s budget could not afford his fee, but it was still the beautiful sixties—so he cut the fee in half and for several electrifying days the world seemed to glow.  I started keeping a careful record of them, but finally exhaustion overtook me.  They were all written in the evenings after a lot of activity and a good bit of drinking, and so a word every now and then is illegible.  The following does not presume to be elegant or even well-written prose, and I have not tried to improve upon it, except for deleting a few redundancies.  It’s merely a diary of those intense days, a diary I think may hold some interest for others, especially as it relates to Allen and to Frank Stanford.

Thurs. May 1, 1969—Larry Johnson and I drove down from Fayetteville today to Little Rock to meet Peter and Allen as they came in from Arizona.They missed the plane in Tucson that would have put them in Little Rock at 2:15, but made it in at 6:10, which was o.k. as it afforded my parents a chance to drive over from Pine Bluff (about 40 minutes away) to meet them, too.  The people in the airport had a treat. My mother, a large, loud, laughing woman, had been at the shooting duck machine raking up the points.  Then came in Allen and Peter with beautiful hair and beards (and I have long curly blond hair).  But the great thing was my grandmother who is nearly 80 also came along—she and Allen (on a cane from his accident some months ago) going through the airport arm in arm getting looks like “Why doesn’t that hippy give the old lady her cane back”—and Mother at the top of her voice chattering away about Arizona, when they had just flown in from, and her sister out in Tucson and [telling] Allen what to see in Arkansas, and Daddy telling Peter about his heart condition, and all of us talking about the hazards of cigarette smoking.  Then the baggage was screwed up—but got worked out and my parents and Grandma seemed to love them and they liked my parents and Grandma a lot too and talked about them for some time.

Allen was very concerned that he had messed us up and made us wait—but it was o.k. since Larry and I went to the museum and looked Egyptian things and went downtown and also had a meal with my Grandma and my parents..  Next, he was really concerned about the money, where it came from, etc. because we were paying him.  This was essentially a student project to bring him here but with the largest chunk of the fee (which he had cut in half) put up by the Program in Creative Writing.  He seemed worried that it had come from the pockets of students and faculty members, though few faculty members had contributed anything.  I was struck by his kindness and honest concern over all this.

We headed out of Little Rock up into the left corner of the state, into the mountains, trying to see as much as we could in the two hours left of daylight.  I was quizzed about Arkansas foods, politics, [illegible], and other things I hadn’t thought about in a long time, and why all that wasn’t subject for my poems instead of my “Baudelairean bullshit”.  But I’m too close to Arkansas at least right now to give it much poem material I think.

Allen wanted to get some native Arkansas food and insisted on stopping in Atkins, Ark., “the pickle capital of the world,” so they claimed, and where they sold fried dill pickles, which he really seemed to like and which weren’t at all bad.  We also had catfish and “taters,” which is what the big menu at the back of the cafe called them.  Peter had fried chicken, and Larry, having eaten as I had in Little Rock, wasn’t hungry.  Allen gave me hell for the longest time about being over weight and smoking too much—all of which is true.  Allen asked the waitress if she had black eyed peas or possum, but she didn’t.  We left and went higher and higher into the Ozarks.  I couldn’t get over what a  beautiful person Allen was and all of Peter’s kindness, too.  The moon was full and made enough light in the car for me to see Allen’s great profile and head beside me.  We talked of Lenore Kandel and Harold Norse and this and that.  We stopped at a mountain top and looked down at Lake Fort Smith—one of the grandest views around.  And we watched it awhile.  The moon’s light was just enough and it was better than daylight, and Allen talked on about an ancient Tibetan festival going on tonight for the moon—in Tibet, I guess.  And we pissed and got going again.

Allen talked about my parents and Grandma and seemed surprised at how ribald and funny they were.  I said, “Grandma’s getting older but laughing more and more,” and he said that was a good line, better than all my “purples,” and we began talking about the poetry of natural speech and got into Fayetteville around 11:30 or so and took Allen and Peter to The Mountain Inn, where the people behind the desk knew who he was and looked pleased, and a young kid asked when he would read and Allen replied at 8:00 tomorrow.  We went up to the room, which was nice, had a good view, and overlooked the pool.  Allen was opening his suitcase and had some interesting looking beads, which I admired, and which he immediately put around my neck—and again I thought what a kind and gentle guy.  We went back down.  Allen and Peter wanted to get a cup of coffee and wander around the town, but Larry and I were too tired, so we went to my apartment where our wives had fixed popcorn.  Some people came over and we didn’t get to bed for a long time.

You are currently reading With Allen in Arkansas: An Ozark Diary, by John Wood (Thurs. May 1, 1969) at 21st Editions.