21st Editions is now celebrating sixteen years of The Art of the Book! In this series of sixteen emails we are sharing with you a chronology of highlights, events and stories from the beginning of our unique publishing endeavor up until now. We hope you enjoy them. 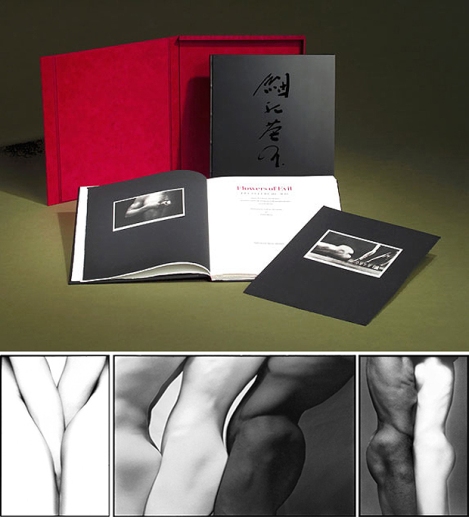 John Wood suggested to Eikoh Hosoe that we pair his work with the poet, Charles Baudelaire, and Eikoh told John that Baudelaire was his favorite poet. They each initially selected 11 poems–9 of them matched! Eikoh, John, and I spent a full day, as John Stevenson hosted us at his then Platinum Gallery in Chelsea, for the signing ritual of the platinum prints and the colophon pages. Eikoh was methodical in signing all of his prints. He would sign for an hour and then close his eyes for 15 minutes or so. It was a real dance and an honor to watch. I admire him and his demeanor, which is not unlike what I would expect if I were to meet the Buddha. In fact, I believe I did.

The Sonnets of Shakespeare

Flor Garduño does not speak English. I do not speak Spanish. So working with each other was a new challenge, even though we had a translator. This edition was three years in the making and contains many of Flor’s greatest images.

Crowd and Shadows of the Dream

This set of books further challenged our standards of production. After printing all of the books letterpress with metal type and spending three days with Misha Gordin at the Hotel Northampton signing the mounts for the silver prints he made, the binder contacted us with a concern about very faint yellow fibers in the European made 100% cotton paper noticeable only if held up to the sunlight. While it seemed insignificant at the time, we had no way of knowing if whatever this was could migrate further. After meeting with a representative from the paper mill and bringing our own chemist in, and then months of further deliberation, we realized that we could not determine whether it was a problem or not. So, I decided that we had no choice but to start over again. And, even though it cost us tens of thousands of dollars, we have been able to sleep at night ever since.

John Wood’s pairing of Brigitte Carnochan and Raúl Peschiera embellished our diverse offerings. Brigitte Carnochan’s personally printed silver gelatin prints and Raúl Peschiera’s epic poem of love, revolution, and violence in recent Peruvian history blends the life and loves of failed revolutionary Abimael Guzmán, the founder of Sendero Luminoso, the Shining Path. Peschiera depicts him as both the passionate revolutionary and the passionate lover. Carnochan, one of the greatest photographers of both flowers and women, takes on beauty as her subject and theme. The result is a book of intense beauty–one that interweaves the floral and the feminine within the context of love and political passion. The book comes with one of Carnochan’s original, classic hand-colored prints.

You are currently reading #7/16: An International Year at 21st Editions.