The work of Ben Nixon caught our eye and arrested us because of his stylized vision and expert and brilliant skill as a printer of his wet-collodion plate negatives.

The wet collodion process is an “early photographic technique invented by Frederick Scott Archer of England in 1851. To a solution of collodion ( cellulose nitrate) Archer added a soluble iodide and coated a glass plate with the mixture. In the darkroom the plate was immersed in a solution of silver nitrate to form silver iodide. The plate, still wet, was exposed in the camera. It was then developed by pouring over it a solution of pyrogallic acid and was fixed with a strong solution of sodium thiosulfate, for which potassium cyanide was later substituted. Immediate developing and fixing were necessary because, after the collodion film had dried, it became waterproof and the reagent solutions could not penetrate it. A modification of the process, in which an underexposed negative was backed with black paper or velvet to form what was called an ambrotype, became very popular–as did also a version on black lacquered metal known as a tintype, or ferrotype.” (Encyclopedia Britannica, 2008)

Keeping with the bookmaking tradition 21st Editions was founded on, Ben’s 10 silver-gelatin prints are accompanied by a bound book with nine poems inspired by the work, printed letterpress, and illustrated with 10 small platinum prints. 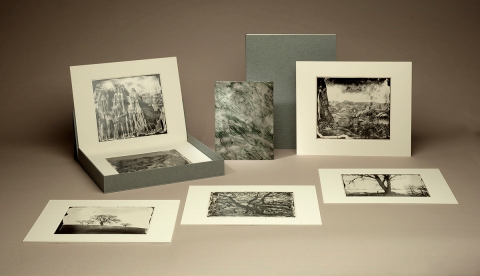 You are currently reading 21st Editions sees the work of Ben Nixon at Photo LA, January, 2012: at 21st Editions.